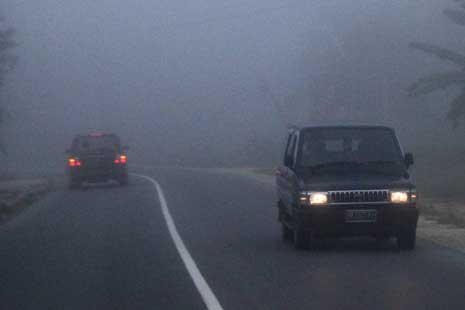 Jambi - The thick and chocking haze from ground and forest fires that has blanketed Jambi for the past three months has pushed up the number of sufferers of respiratory tract ailments, health officials said on Tuesday.

Andi Pada, from the Jambi provincial health office, said the number of people suffering from respiratory tract ailments in the Sumatran province has risen to 3,020, with 1,241 of them in the capital.


Batanghari district followed with 943 people, East Tanjung Jabung with 581 and Muarojambi with 455. There were no reports yet from the seven other districts and municipalities in Jambi.

The local health office has already distributed some 3,000 masks to the population, especially for motorists.

Zubaidi, the head of the Jambi Disaster Mitigation Agency, said that a team from the Agency for the Assessment and Application of Technology (BPPT) was attempting to artificially induce rains in the area by spreading salt in the sky over Jambi.

However, he said, the rain-making often failed because of the scarcity of clouds and the very dry nature of the air.

“But this Tuesday morning, rains have begun to fall, although not heavily,” Zubaidi said.

“Hopefully there will be enough clouds over Jambi in the next few days for the rains to overcome the problems of smoke and ground and forest fires in Jambi.”

A thin rain began to fall over Jambi city at around 7:30 a.m. but only lasted for 15 minutes, failing to rid the city of the thick and chocking smoke.

Even after the rain, visibility was well below one kilometer and monitoring from the Jambi Environmental Agency showed the air pollution index at 95 to 97 particles per million.

By 8 a.m., no flights had been able to land at Jambi’s Sultan Taha Syaifuddin Airport because of the low visibility. The first airplanes usually land at the airport at 7 a.m. Alzog Pendra, the operational manager of the airport, said that planes can only land if visibility is at least two kilometers.

Meanwhile, environmental activists in Jambi on Tuesday criticized the local governments for its slow response to the haze problem that began three months ago.

Rakhmat Hidayat, the executive director of the Indonesian Conservation Community and the Jambi Conservation Information Stall, deplored the local government for not acting quickly to deal with the growing haze problems in the region.

He said that the government was not fast enough in preventing the use of fire for land clearing, both by large plantation companies and by individual farmers.

The practice of clearing land with fire is outlawed but enforcement has been hard because of the limited funding and personnel.

Rakhmat said that thousands of plantations and forests in Jambi were now on fire, mostly intentionally, but the local government has not taken any actions against those making the fires.

He also said that the government was late in distributing masks to minimize the number of sufferers of respiratory tract ailments.