Why Historic Preservation Needs to Be Part of Disaster Planning

Natural disasters have taken a heavy toll on historic landmarks around the U.S. When Hurricane Katrina swept through parts of New Orleans in 2005, floods damaged 19th- and 20th-century buildings, causing some to collapse. High winds smashed windows and stripped away the outer layers of houses, shops, and museums. More recently, Hurricane Sandy took down monuments in the 1849 Evergreens Cemetery in Brooklyn and damaged the electrical system of the Fraunces Tavern Museum—which dates back to the American Revolution—in Manhattan.

Between rising sea levels, predictions of increasingly extreme weather patterns, and the Big Onealways looming over the West, the U.S. is bracing itself for more naturaldisasters. But a recent report out of the University of Colorado Denver and University of Kentucky finds that the U.S. may not be as prepared as it could be to protect historic sites from floods, wildfires, and tornadoes. In fact, almost two thirds of all states lack historic-preservation goals and strategies in their disaster plans.

“It’s such an important issue because so many historic resources were built  before modern flood regulations and modern building codes, so they’re located in areas that are prone to these kind of disasters,” says Andrew Rumbach, a professor of planning and design at University of Colorado Denver, and one of the study’s researchers. “When you [saw] them in Hurricane Katrina, which destroyed thousands of historic resources, it was a real loss. The preservation community tried to save as much as they could and restore it back with historical integrity.”

To study how well disaster management is integrated intostate preservation plans (and vice-versa), Rumbach and his colleague Douglas Appler, a professor of historic preservation at University of Kentucky, analyzed the historic-preservation and hazard-mitigation plans of all 50 states. These documents, which are updated every five years or so, lay out goals and strategies to help guide local governments and organizations in times of crisis. The results were published this week in the Journal of the American Planning Association.

In the first set of documents, on preservation, the researchers sought out words like “emergency,” “disaster,” and “hazard.” In the second, they looked to see if historic preservation was explicitly discussed, and whether a representative from the preservation department was included in the disaster-planning process.

They found that two-thirds of states explicitly mentioned emergency preparedness in their preservation plans, and 25 states included specific policies, initiatives, and plan objectives. But 60 percent of all states lack specific preservation strategies in their hazard-mitigation plans. And only 13 states included specific goals and strategies that mentioned protecting historic resources.

Yet the interests of historic preservationists and disaster planners do overlap. Protecting historic resources—structures, sites, and landscapes that have been nationally registered—are important for disaster resilience, Rumbach tells CityLab. “Not only are they important for community identity, and for people’s sense of belonging, and why they value their communities, but also they’re often very important for local economies.” (New Orleans, famous for its historic attractions, drew more than 9.5 million tourists in 2014 and added $6.8 billion to its local economy, for example.)

Although local communities mayhave their own preservation and disaster-mitigation plans, Appler says it’s still important for states to have both in place. “The state is a guidance document, identifying areas that should be of concern or special focus for local plans,” he says. “Then [the local agencies] could develop guidance for people who live in historic districts—what you can do to prevent damage to your house in the case of flooding, and who they should contact.”

Rumbach adds that states can be particularly helpful in small cities where the local communities may not necessarily have the capacity to plan for natural disasters themselves. 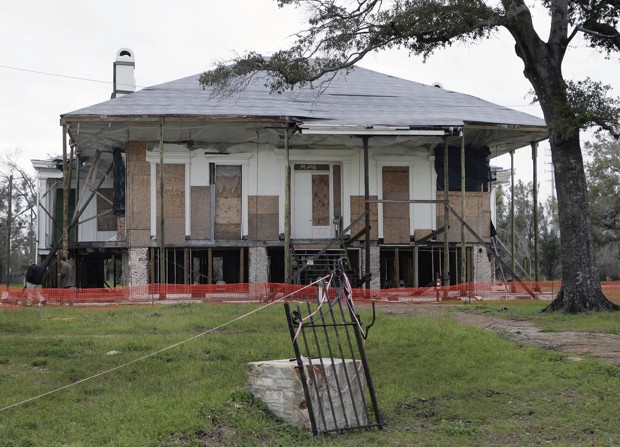 Using publicly available spatial data, the researchers also mapped out historic sites that were vulnerable to flooding in three states: Kentucky, Florida, and Colorado. They found that 15 percent of the 3,380 historic sites listed for Kentucky are located in the state’s 100-year or 500-year floodplain, meaning the area has either a 1 percent or 0.2 percent chance, respectively, of being flooded on any given year.  Roughly of quarter of the 1,700 sites in Florida are found inside 100-year and 500-year floodplains.

But there’s room for improvement in the data. Appler and Rumbach calculated that only 6.8 percent of Colorado’s 1,480 National Register sites are located in an area vulnerable to flooding, but that’s in part because more than half of the counties’ floodplain data are not available through FEMA’s National Flood Hazard Layer.

The good news is that there are at least two programs that can help states better connect the two areas of planning: the National Park Service’s Certified Local Government Program and the National Main Street Program, which are partnerships between national and state agencies and local governments that focuse on historic preservation. Communities that have these programs in place already have a good infrastructure to protect historic sites.

They “can be very useful when we start thinking about how these two areas of planning [historic preservation and disaster planning] are going to by linked,” says Appler. “They know the historic resources, and the people who are involved in those two programs are publicly inclined and are willing to contribute their time for the betterment of the community.”

“Our study is really looking forward into the future,” adds Rumbach, “and saying, ‘What can communities who have a lot of historic resources that may be at risk from disasters can do to better plan for them?’ ”