How you can help Hurricane Dorian disaster relief 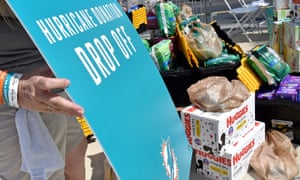 The devastation caused by Hurricane Dorian in the Bahamas has left dozens of people confirmed dead, and potentially thousands still missing. “We have no food. No water. We’re abandoned here,” a survivor in one of the worst-hit areas of Grand Bahama told the Guardian.

Hubert Minnis, the prime minister of the Bahamas, called the damage “unprecedented”. Another official estimated the damage could take hundreds of millions, if not billions of dollars, to repair.

A wide range of organizations are raising money to provide immediate disaster relief to survivors in the Bahamas.

Some have argued that donors who want to make a real difference after a natural disaster should try to give money to local organizations.

HeadKnowles was founded by two friends in 2015 to raise money for disaster relief after Hurricane Joaquin. Since then, Lia Head-Rigby and Gina Knowles, two Bahamians living in the United States, have continued to coordinate donations for disaster relief after multiple hurricanes. The group has currently raised more than $1m on GoFundMe to help Dorian survivors. HeadKnowles has been endorsed as a trustworthy NGO by the founding director of the National Art Gallery of the Bahamas, and its leaders are cited as local relief experts in news reports.

GoFundMe also has a dedicated page of other “verified” crowdfunding campaigns to help those affected by Dorian.

Minnis has reportedly encouraged donors to give to the Salvation Army, which is working closely with the Bahamian government.

Miami, Florida, is just a short distance from the Bahamas, and many local organizations have been coordinating aid to Dorian survivors, including the Miami Herald, the region’s most prominent newspaper. The news organization pledges that 100% of funds raised “will go directly to help people affected by Hurricane Dorian in the Bahamas and other affected areas”.

30+ other organizations vetted by Charity Navigator

Charity Navigator, a group that vets American philanthropic groups, has a list of dozens of organizations in the Bahamas and in the United States that is says are highly rated and able to provide relief to Dorian survivors.

The charities on this list “have pre-positioned resources to deliver food, emergency shelter, medical care, and other critical items to people impacted by this storm” and Charity Navigator “has confirmed these charities’ efforts on the ground”, the group said.