WHEN the 2004 Boxing Day tsunami struck, killing 230,000 people across 14 countries, the level of death and devastation came as a wake-up call to governments and disaster managers.

The 9.1 magnitude undersea earthquake that triggered an upward lift of the seabed by several metres and displaced 30 cubic kilometres of water was the third largest in recorded history.

The resultant tsunami travelled at 800kmh through deep water before slowing and increasing in height by up to 10 metres as it crashed ashore. 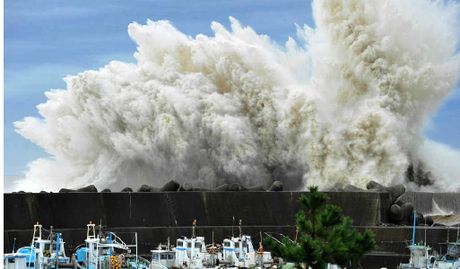 Surging waves hit against the breakwater in Udono in a port town of Kiho, Mie Prefecture, central Japan on September 21, 2011. Daiji Yanagida

By comparison, the 5.8 magnitude earthquake experienced off the Sunshine Coast was barely a ripple causing only minor structural damage and no injuries.

In fact our region is more at risk from an onshore earthquake than a tsunami triggered by one off-shore.

That does not mean it's a threat ignored.

A series of planning exercises rolled out over the past couple of years have tested early warning systems, evacuation plans and disaster coordination at a local, state and federal level.

Professor Tim Smith, the inaugural director of the University of the Sunshine Coast Sustainability Research Centre, warns that while the plans in place are robust, their efficacy won't be fully understood until tested by a real event.

He says the key to minimising risk is to keep exploring ways to improve community resilience.

Geoscience Australia puts the chance of a M (magnitude) 5.5 directly under the urban strip running from the Sunshine Coast, through Brisbane to the Gold Coast is a 1-in-1200-year event.

"If the 1989 M5.4 Newcastle earthquake is anything to go by, a M5.5 under this urban strip could be damaging, particularly to lower-rise older buildings on soft soils," a spokesman said.

"However low, the potential for a magnitude 5+ earthquake onshore, and its impact, is many times m

Geoscience Australia says tsunami risk in eastern Australia predominantly comes from large earthquakes south of New Zealand with the main impact likely to be to the southern states of Victoria and Tasmania.

"Queensland is fairly well protected from tsunami in general,'' the spokesman said.

"Very large (M8.5+) earthquakes in the Solomon Islands and Vanuatu will cause large tsunami that are directed towards Queensland, but the Great Barrier Reef acts as a giant barrier so the wave energy getting to the Queensland coast is diminished significantly.

"A large (M6.5+) earthquake on the continental shelf might cause a moderate tsunami that might do some damage to very low-lying infrastructure, but as the chance of a M6.5 occurring off the Sunshine Coast is a 1-in-5000 year event, meaning the overall risk is very small."

Despite this Geoscience Australia has modelled many "Rim of Fire" earthquake scenarios which may create a tsunami and then modelled whether a generated tsunami is likely to affect the Australian coastline.

The Queensland Government conducted a study in 2013 to identify the extent of tsunami hazard for the Queensland east coast.

A site specific study was conducted for the Sunshine Coast which identified the continuous dune system provided protection for most of the community.

Vulnerable areas were defined as those areas that are less than 10 metres above sea-level and within one kilometre from beaches as well as the water edges of harbours and coastal estuaries.

"Each local government has a Disaster Management Plan based on risk and hazards,'' a Palaszczuk Government spokesman said.

"Our government is working with all councils to enhance their Emergency Alert arrangements to ensure communities are warned of impending threats."

"This exercise was used to test the ability of the State Disaster Coordination Centre to receive and forward alert messaging from the Joint Australian Tsunami Warning Centre to disaster management response stakeholders,'' a spokesman said.

"The principle of disaster management is 'all hazards' based, so the response to an earthquake is similar to other disaster events.

ore likely than that of an offshore earthquake and tsunami impacting south-east Queensland."

The Tsunami Alert Community (Kogami), an NGO educating people on disaster risk reduction in West Sumatra, is urging the provincial administration to improve the management of escape buildings or temporary evacuation places (TES) to increase their effectiveness.Kogami executive director Tommy Susanto said that although the provincial and Padang city disaster mitigation agencies (BPBD) had announced a number of buildings as TES, their effectiveness was still in question.“The buildings will not function optimally unless they come with signboards identifying them as TES, the owners agree to open the buildings when there is an earthquake that has the potential to cause a tsunami and people are regularly trained to evacuate to the buildings,” Tommy told The Jakarta Post, on Sunday.He also questioned why a number of buildings located within 500 meters from the shoreline had been publicized as being TES despite the fact that they were at risk of being destroyed when a tsunami hit.The only real new TES, according to Tommy, were two that were located in Koto Tangah. Both, which were opened only three weeks ago, were built by the National Disaster Mitigation Agency (BNPB) and each had the capacity to hold between 4,500 and 5,000 evacuees.“Both are in need of better daily building management and people in the surroundings also need to be trained to make use of them,” he said.Lack of management had led to traffic congestion and panic everywhere during the 2012 earthquake as hundreds of thousands of people drove to the east, away from the beach.They did not make use of the buildings previously known as shelters, such as school buildings, because the school keepers would not open the gates for evacuees.“Such things would not happen if the regional administrations had the guts to officially declare the buildings as TES and put signboards there,” Tommy said.He said such a situation could occur again if the management of the TES buildings was unclear and people lacked knowledge.Kogami recorded that between 300,000 and 400,000 of Padang City’s 1 million population were possibly threatened by a tsunami. Most of them lived in the Koto Tangah district, which is a sloping area and lacks escape routes for getting away from the beach.Tommy admitted that efforts had been undertaken by the government after experts considered Padang to be a tsunami-prone city. Similar efforts had also been done by the private sector, including the Ibis and Grand Zuri hotels, which had declared their buildings to be public tsunami shelters.Tommy, however, asked the BPBD to be selective in naming a building as a TES, to apply better TES management and to regularly train locals on the use of a TES. He also suggested that buildings located within 500 meters of a beach should not be named TES.The head of the provincial BPBD’s prevention and preparedness division, Rumainur, said that there are currently 26 buildings with a combined capacity for 70,000 evacuees that could function as TES in Padang. The number does not include two more that are to be built this year in Koto Tangah.Rumainur said that some 500,000 people in Padang live in tsunami red zones. Of them, 200,000 would not be able to escape away from the beach. The existing TES, he said, would be able to accommodate some one-third of the people.“We only need to build TES to accommodate the remaining 130,000 people,” Rumainur said.Of the existing TES buildings, according to Rumainur, most were government office buildings that had been rebuilt stronger after the 2009 earthquake, school buildings, campuses, mosques, new hotels and old buildings that had survived previous tsunami.