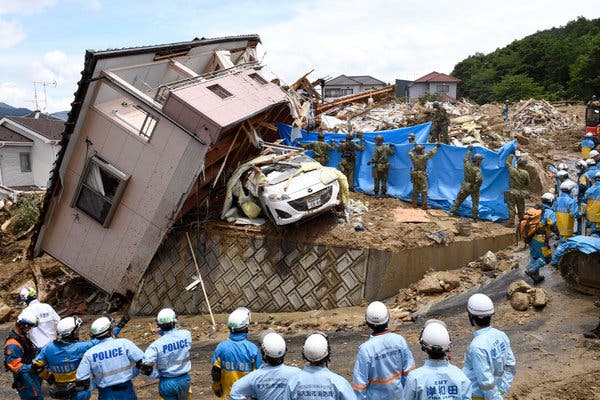 KURASHIKI, Japan — As rain poured and the creeks and rivers that course through the city of Kurashiki began to rise, Miyuki Komada repeatedly tried to call her 70-year-old mother, who was home sick with a cold.

But Ms. Komada, 37, could not get through. And heavy rain Friday drowned out the sound of evacuation sirens. When she and her sister arrived after 9 p.m. they found their mother dozing.

As they drove her out, water was already nearing knee height. Soon after, a nearby levee broke, and water surged to shoulder height within a half-hour, Ms. Komada said.

As she searched through mud and standing water for what few valuables could be salvaged from the family home on Monday, the risk her mother would have faced was clear. The water line climbed to the second floor of the two-story house, stopping halfway up the windows.

Japanese soldiers patrolled the neighborhood, knocking on doors and asking if everyone was safe from the rains, which produced jarring images of widespread destruction, a reminder that a country known for its orderliness is not immune to the chaos of natural disasters.

The sudden surge of floodwaters in this area of western Japan proved deadly for many. Of the 124 people killed as of early Tuesday morning, 28 were here in the Mabi district of Kurashiki, the public broadcaster NHK reported. To the west, Hiroshima Prefecture reported 45 dead. An additional 63 people were missing.

Thousands are displaced, too. In Okayama Prefecture, which includes Kurashiki, 4,234 people were staying in shelters as of Monday morning, according to the Sanyo Shimbun, a local daily newspaper.

Prime Minister Shinzo Abe canceled a trip to Europe and the Middle East set for later this week to respond to the disaster.

Military and rescue service helicopters slowly circled in the blue skies on Monday, surveying the damage and searching for missing people. Warm, sunny weather helped ease the immediate threat of more flooding. But water continued to carve across what was once a road in Mabi. Deep sand and a roof that had been deposited across both lanes made passage impossible on anything but foot.

This area is usually considered one of the safest in Japan, sheltered from typhoons and with little history of deadly earthquakes or tsunamis. After the 2011 earthquake and tsunami on Japan’s northeastern coast that killed nearly 16,000 people, some moved to this area seeking safety.
Image
Houses in Kurashiki remained submerged on Monday.CreditKyodo News, via Associated Press

Now even this relatively placid area of one of the world’s most prosperous countries feels perilous to those who witnessed the destruction.

“It was quite frightening,” said Tamae Hirose, 57. She had driven through the rising water to safety.

“I just hit the gas, because I knew I couldn’t stay here,” she said.

After returning, she combed through her house, sweeping out water and mud while looking for anything to salvage.

“We don’t know what to do yet,” she said. “All I can do is stay in the evacuation center, come back and clean and look for a new place. I don’t think we can ever live here again.”

Mieko Tamura, 70, said she had experienced a flood once previously here, in 1976. But the water came only to knee height, and she was not worried.
Image
Flooding was still severe on Monday in the Mabi area of Kurashiki.CreditIssei Kato/Reuters

“This time it was so quick,” she said as she cleared debris from the yard of her beauty parlor, where chunks of grass were torn up and a tadpole swam in a puddle.

A loose timber had smashed her front window, and the interior was damp with water and mud. Nothing of value survived.

“Some people around here look like they want to steal stuff,” she said. “I don’t care. They can take anything.”

The Times needs your voice. We welcome your on-topic commentary, criticism and expertise.

The Asahi Aluminium Industrial Company plant in Okayama exploded late Friday after workers evacuated during the flooding. Neighbors said they had had no warning that the plant posed such a risk.
Image
A resident carrying water on Monday near submerged and destroyed houses in Mabi.CreditIssei Kato/Reuters

Volunteer firefighters had been meeting with local officials when the plant erupted.

“There was a sound like thunder or lightning,” said Junichi Kawata, a volunteer firefighter. “Then I turned around it was like a big fireball. The sky was so red.”

Shattered glass and a collapsed ceiling injured his wife, Hiromi, who had been at home. It took her six hours to receive treatment for the cut on her head because of the difficulty in navigating traffic in the floodwaters.

“We never expected the plant to explode,” she said as she wiped off her daughter’s set of traditional Hina dolls, which she placed in the sun to dry. The dolls were ruined, she said, but she planned to dispose of them in a ceremony rather than throw them away.

Officials from the plant were visiting neighbors Monday to apologize, said Takashi Nakano, a spokesman for Asahi Seiren Co., the parent company of the aluminum plant.

“This is the first time to have such an accident,” he said. “But since we have not conducted site inspection yet, I cannot comment on anything at the moment.”

Ms. Komada, who rescued her mother on Friday, returned Monday for memories of her father. He died four years ago, and a small tablet with his name that was placed near the family Buddhist altar was damaged along with the altar itself.

She placed the tablet and a few mud-smeared photos on a tarp to dry. “Today we came for my father’s tablet,” she said. “Tomorrow we will start the full cleanup.”