'unprecedented' heatwave has killed at least 65 people in one week, with the weather agency now classifying the record-breaking weather as a 'natural disaster'.

In the week to Sunday, at least 65 people died of heat stroke while 22,647 people were hospitalised, the Fire and Disaster Management Agency said in a statement.

Both figures are 'the worst ever for any week during summer' since the agency began recording fatalities resulting from heat stroke in July 2008, a spokesman said. 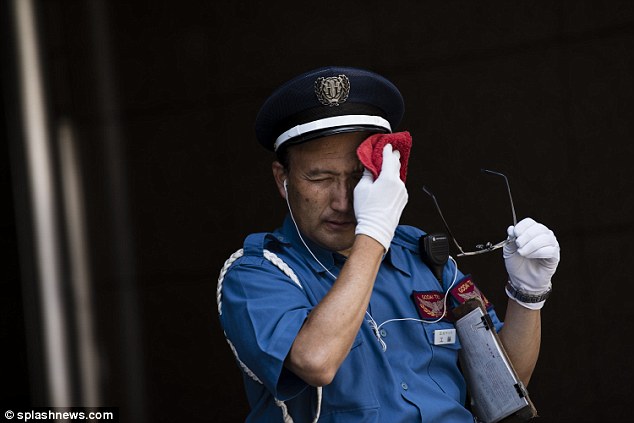 People are struggling to cope in the heat as Japan continues to swelter in its 'unprecedented' heatwave, including in Nagoya, above, where temperatures reached 101.3F (38.5C)

In the week to Sunday, at least 65 people died of heat stroke while 22,647 people were hospitalised, the Fire and Disaster Management Agency said 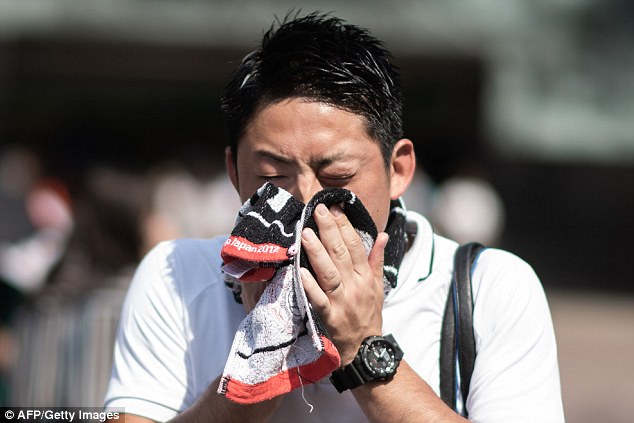 The heatwave 'is fatal, and we recognise it as a natural disaster,' he told reporters.

Eighty people in total have died from the heat since the beginning of July, and over 35,000 have been hospitalised. Many of the victims have been elderly people who were not using air conditioning. 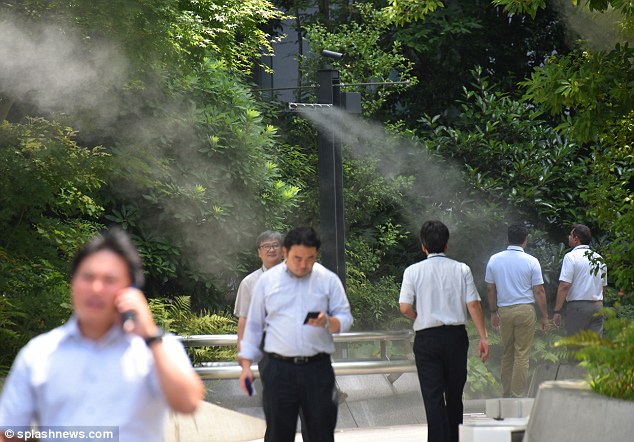 Water is sprayed onto passersby in Nagoya, Japan, during the nationwide heatwave 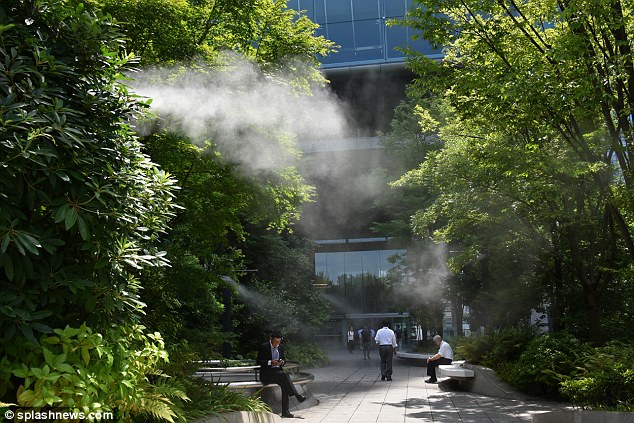 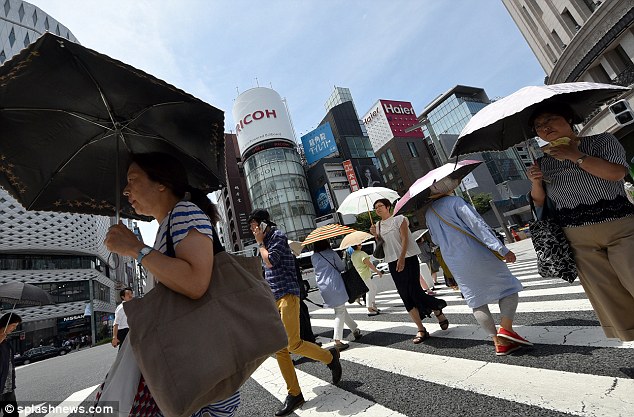 Umbrellas help to ward off the sun's rays in Nagoya, above

Among those killed was a six-year-old school boy who lost consciousness while returning from a field trip.

The government said it would supply funds to ensure all schools are equipped with air conditioners by next summer. 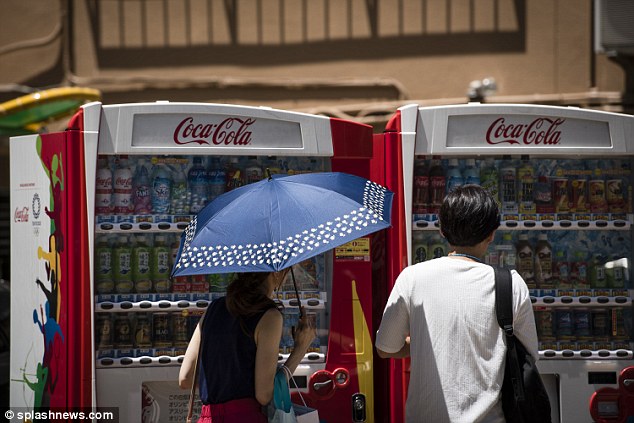 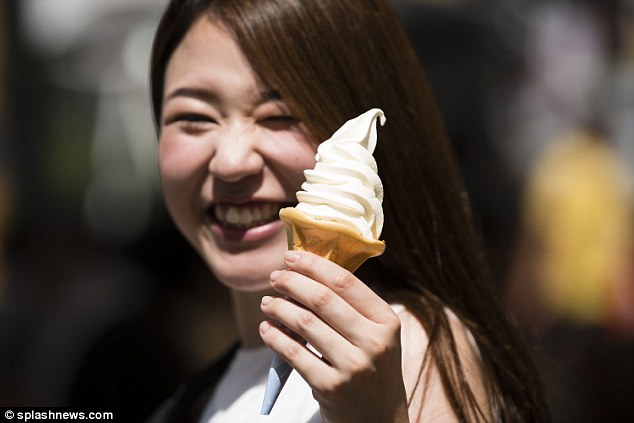 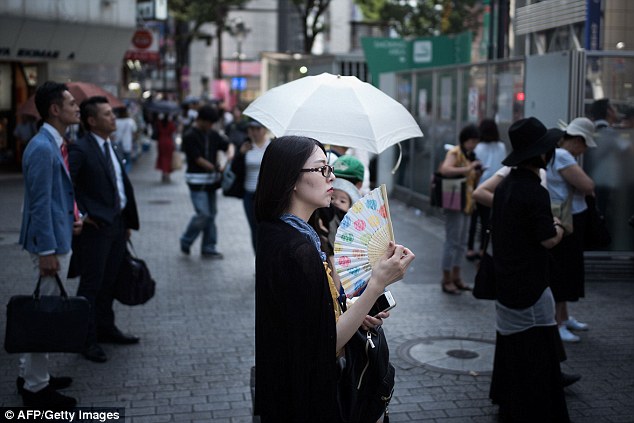 Less than half of Japan's public schools have air conditioning, and the figure is only slightly higher at public kindergartens.

Suga said the government would also consider extending this year's summer school holidays as the heatwave drags on.

Temperatures reaching over 104F (40C) were registered for the first time in Tokyo's metro area on Monday, where the government is promoting Uchimizu, a tradition where water is sprinkled onto the ground, as part of a summer heat awareness campaign. 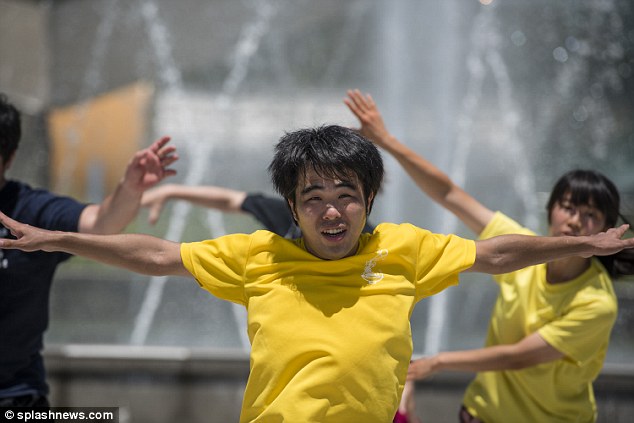 Exercising near water, above, as officials urge people to use air conditioning, drink sufficient water and rest as often as possible 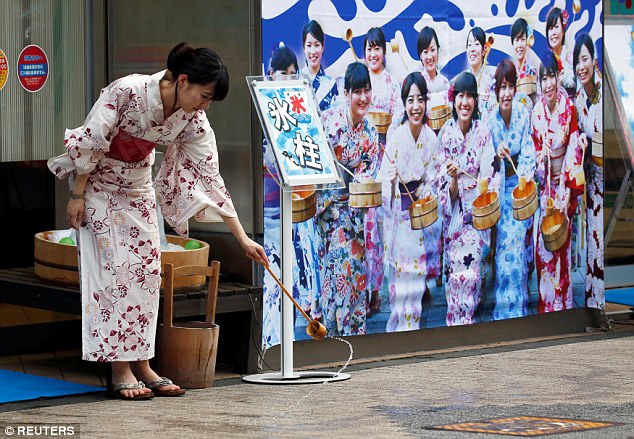 A woman wearing a Yukata, or summer kimono, splashes water onto the hot asphalt in an old Japanese tradition called Uchimizu ritual, meant to cool down the air as the water evaporates, outside a pachinko game parlor in Tokyo 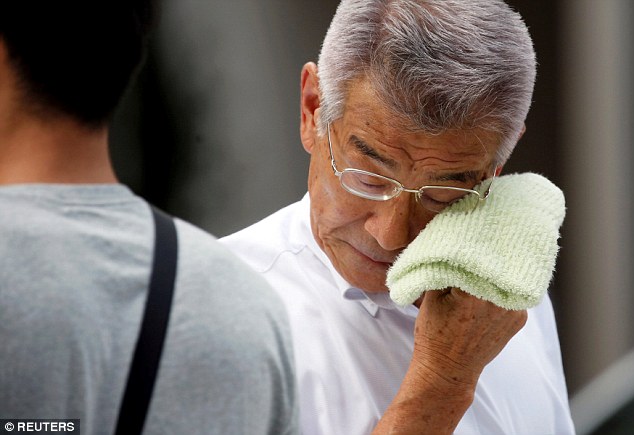 It was marginally cooler on Tuesday, but temperatures remained well above normal in most of the country, and little relief is forecast.

The agency warned that much of the country will continue baking in temperatures of 95F (35C) or higher until early August. 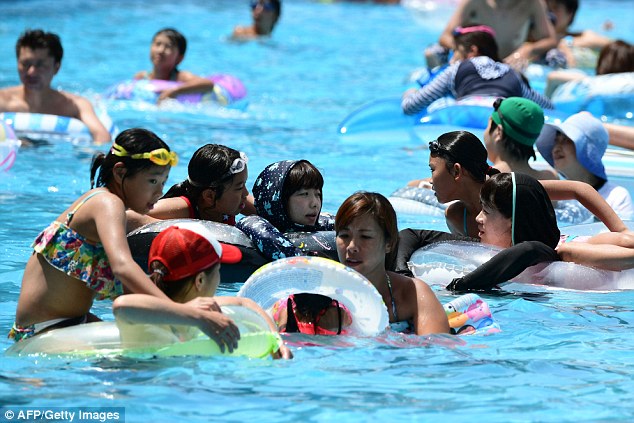 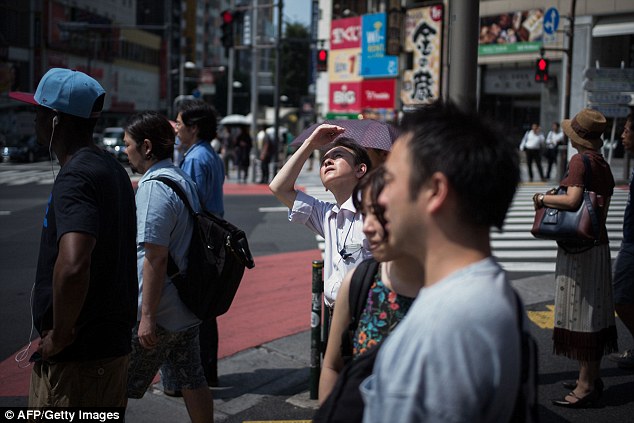 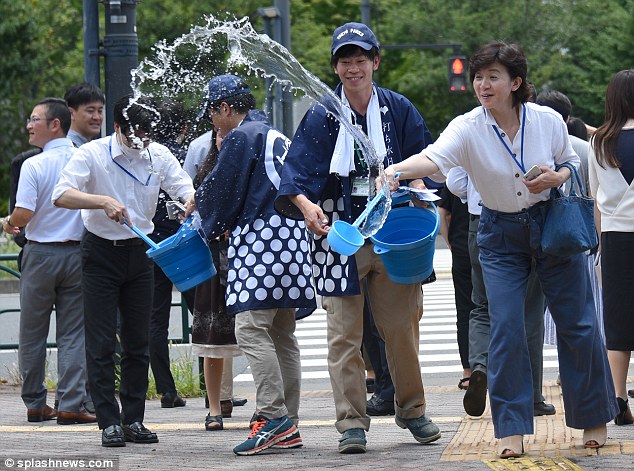 Above: people throw water on the street to help cool temperatures, as Japan's summer has been compared to 'living in a sauna'

Japan's summers are notoriously hot and humid, and hundreds of people die each year from heatstroke, particularly the elderly in the country's ageing society.

The heatwave follows record rainfall that devastated parts of western and central Japan with floods and landslides that killed over 220 people.

And many people in the affected areas are still living in damaged homes or shelters and working outdoors on repairs, putting them at great risk.

The record-breaking weather has revived concerns about the Tokyo 2020 Olympics, which will be held in two years time in July and August.

Tokyo governor Yuriko Koike this week promised that the heat would be given the same priority as measures to counter terrorism.

'It's just as important because the purpose is also to protect people's lives,' she told reporters, comparing Japan's summer to 'living in a sauna'.

Japan recorded its highest temperature ever on Monday as a deadly heatwave continued to grip a wide swath of the country and nearby South and North Korea.

About 10 people have died in South Korea as a result of the heat.

The mercury hit 106F (41.1C) in Kumagaya, a city in Saitama prefecture about 65 kilometers (40 miles) northwest of Tokyo, the Japan Meteorological Agency said. 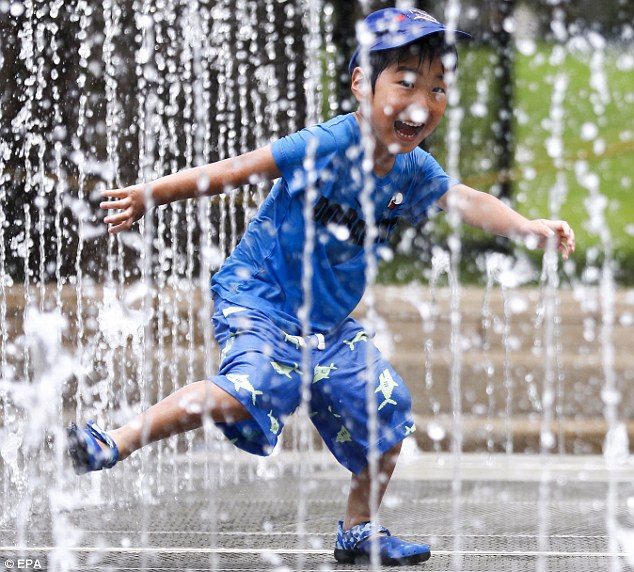 Great way to cool off: A boy frolics in the water jets at a park near Nerima in Tokyo, Japan 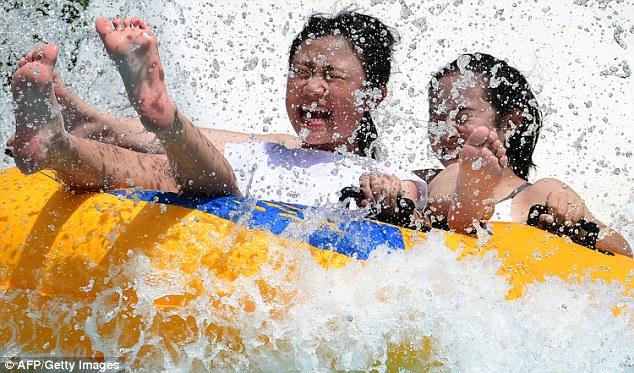 Splash down: Youngsters enjoy a ride down a water slide at the Toshimaen amusement park in Tokyo 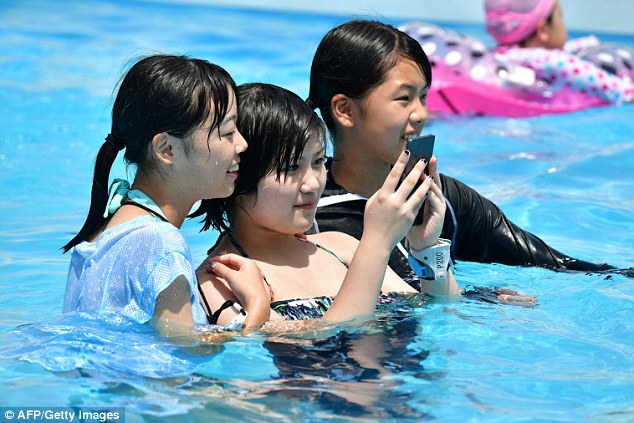 Although the worst of the heatwave is expected to conclude this week, authorities have urged people to stay inside and use air conditioning. 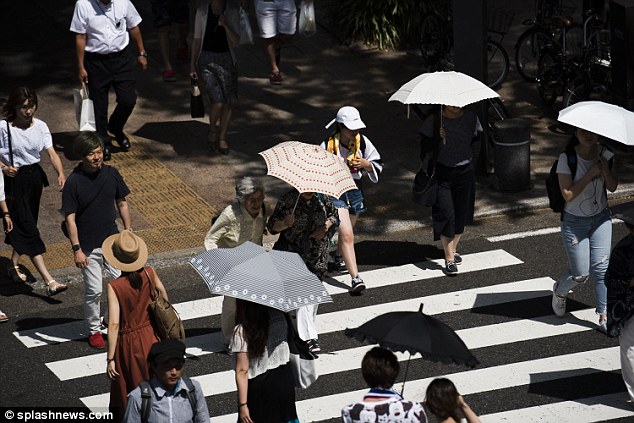 Japan continues to swelter in a heatwave - scenes in Nagoya, Japan, above 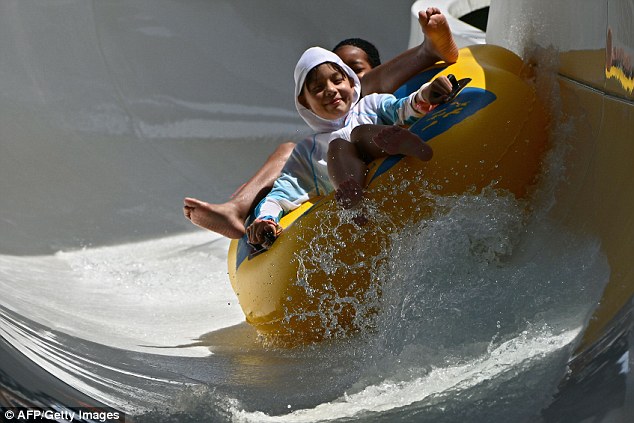 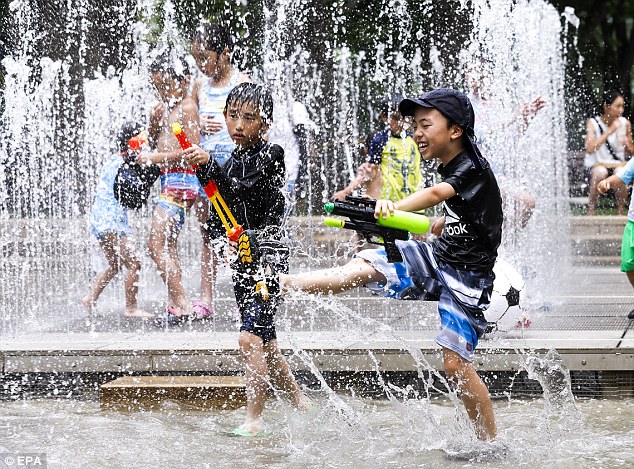 Children play in the water jets at a park near Nerima in Tokyo, Japan

'But our traditional wisdom is not enough to beat the heat like this,' she acknowledged, 'so we will be using cutting-edge technology.'

The 10 people who died in South Korea succumbed to heatstroke and other heat-related causes, seven of them last week, the Korea Centres for Disease Control and Prevention said.

About 1,040 people have fallen ill because of hot weather from May 20 to July 21, an increase of 61 per cent over the same period last year, it added.

South Korea's highest-ever morning low was recorded in the city of Gangneung, where the temperature was 87.8F (31C) at 6.45am on Monday. The morning low in Seoul was 84.6F (29.2C), a record for the country's capital, according to South Korea's weather agency.

The mercury hit 103.8F (39.9C) in the south-eastern town of Hayang, the highest temperature in the country so far this year.

In North Korea, residents fanned themselves on crowded trolleys or protected themselves from the sun with parasols as temperatures in Pyongyang, the capital, reached 93.2F (34C).

Weather reports said even higher temperatures were recorded on the country's eastern coast.