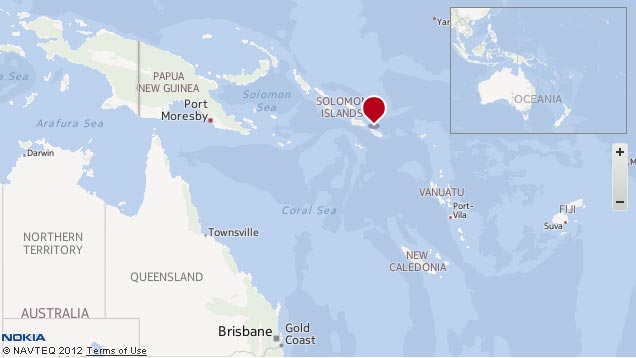 (CNN) -- An 8.0-magnitude earthquake struck off the Solomon Islands in the South Pacific on Wednesday, triggering a tsunami that killed five people but didn't threaten the wider region.

Four elderly people and one child died after the roughly 1-meter (3-feet) high wave hit the Santa Cruz Islands, an eastern region of the Solomon Islands, said Augustine Bilve, a director at a hospital in Lata, the main town in the area.

The strong waves appeared to have caused damage and disruption at the local airport and nearby villages. Bilve said that some patients were being relocated, but the hospital was intact.

"Our staff in Temotu province felt the quake and within five minutes there were a number of wave surges, which flooded the runway there," said Andrew Catford, the program director in the Solomon Islands for the humanitarian group World Vision.

World's biggest earthquakes since 1900
Temotu province is another name for the Santa Cruz Islands. World Vision said it was still trying to gauge the damage from the tsunami in the area, adding that "it is likely that several villages close to the airport have been severely impacted."

The Pacific Tsunami Warning Center initially issued a tsunami warning for several countries in the area, including Papua New Guinea and Fiji. But the center later canceled the alert after reassessing the relevant data.

It also called off a tsunami watch it had sent out for a larger number of countries in the region such as New Zealand, Australia and Indonesia.
The center of the quake was located near the Santa Cruz Islands, the U.S. Geological Survey (USGS) said. It was initially reported to be 3.6 miles deep, but that was later revised to a depth of 17.8 miles.

Japanese authorities issued advisories that small sea level changes could affect the country's entire eastern coastline Wednesday.
The New Caledonia High Commission in the capital of Noumea ordered the immediate evacuation of coastal residents on the eastern coast of New Caledonia and the Loyalty Islands.

The main quake was preceded by a 6.3-magnitude quake in the region and was followed by several others, the largest of which had a magnitude of 6.6, the USGS said.

In 2007, an 8.1-magnitude quake struck in the western part of the Solomon Islands, setting off a tsunami. At least 52 people died as a result of the disaster and thousands of others were left homeless.