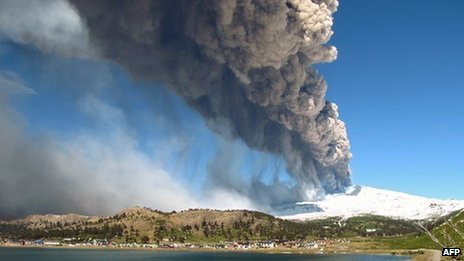 Chile and Argentina have ordered the evacuation of some 3,000 people living near the Copahue volcano in the south of their border.

The authorities in both countries issued a red alert - the highest possible - saying the volcano could erupt imminently. The 2,965m (nearly 10,000ft) volcano - which sits in the Andes cordillera - has so far only spewed gas. Thousands of minor earth tremors have been registered in the area.

"This red alert has been issued after monitoring the activity of the volcano and seeing that it has increased seismic activity," Chilean Interior Minister Andres Chadwick said in a news conference.

"There is a risk that it can start erupting." Argentina revises alert According to Chile's Emergency Office, the evacuation will affect some 460 families living within a 25km (15 miles) radius of Copahue.

It said it could last about 48 hours, but could be delayed because of heavy rains in the region. In Argentina, the authorities had first declared a "yellow alert," but later revised it to the highest level. They have now ordered the evacuation of about 600 people from the town of Caviahue to the neighbouring city of Loncopue.

Last December, Chile also issued a red alert after Copahue - one of the most active volcanoes in the region - began spewing ash and gas, with smoke raising nearly 1.5km in the sky.

Nearby residents were temporarily evacuated, and planes flying over the southern Andes warned to avoid the area. Hundreds of flights were cancelled last year due to the eruption of another volcano in southern Chile. The Puyehue eruption caused huge economic damage not only to property in the area but also to tourism in Bariloche and other resorts